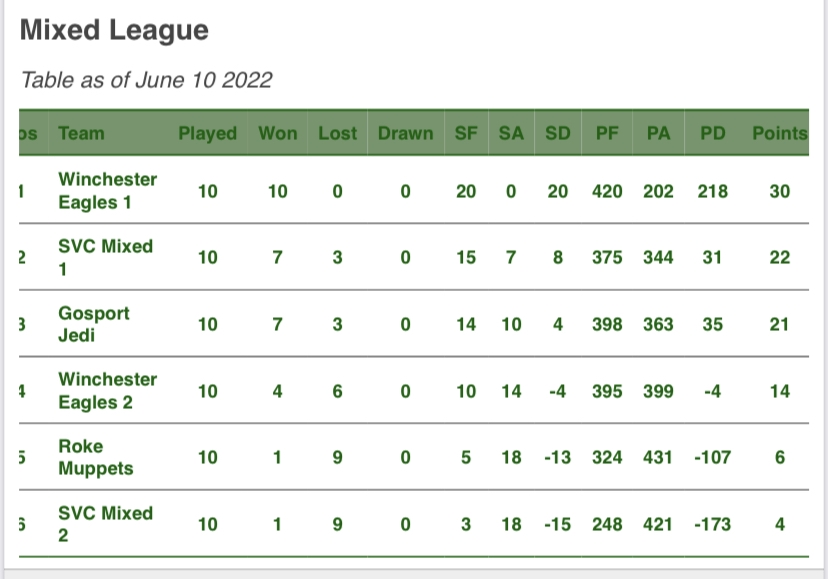 Last night, the Winchester Eagles Mixed Team played the last two games of the 2021-22 SADVA Mixed League.
The Eagles, who had not dropped a single set this season, faced SVC Mixed 2 and Roke Muppets.
The first game was against SVC. After a slow start, the Eagles soon found their rhythm and started imposing their game, securing the first set 21-15.

In the second set, the Eagles upped their game. Their aggressive serves and relentless strong attacks through the middle and through the wings put great pressure on the SVC team, giving them no chances for a come back. In the last few points, Paul came in to serve and he got ace after ace after ace. The second set was quickly over with a convincing 21-12 score.

In the second game against Roke, the Eagles had a head start as Angie (hear hear!) won the toss in a challenging rock-paper-scissors against the Roke team captain.

The Eagles were not going to throw away this once-in-a-lifetime opportunity to start with the serve and Parakhram promptly got a run of aces. This, combined with winning hits from the whole team and quite a few incredibly strong hits from Andy through the middle, quickly got the Eagles to a 9-0 score.

The Eagles soon decided to give Andy a rest, as he had an injured thumb due to a brave dive on the grass last Wednesday. Gareth took on the role of middle player and did extremely well. With such a huge lead, the Eagles were able to try some combinations and played some shoots through the middle and through four and went on to win the first set 21-7.

The second set was also an easy win, with Roke barely reaching double figures. Soon, Olli joined Andy resting on the bench, whilst Gareth and Paul dominated through the middle and Claire, Parakhram and Fab put great pressure from the wings, leaving setter Angie spoilt for choice.
The Eagles took the second game 2-0, becoming undefeated champions of the Mixed SADVA League.

Unfortunately, there was no trophy up for grabs but this season the Eagles dominated the SADVA League, winning in all three categories (Ladies, Men and Mixed). What a season for our fast-growing club!
After giving Andy Edwards a well-deserved thank you card and bottle of wine for running the three SADVA leagues single-handedly, the Eagles headed to the pub for their celebratory drinks.

After so many victories not only in the SADVA Leagues but also in HVA, some club-wide celebrations are certainly overdue and we are sure our social secretary Marshy will soon be on the case so…. watch this space .