hide
hide
No announcements have been posted yet for Winchester Eagles Volleyball Club.

Hat Trick for the ladies at HVA 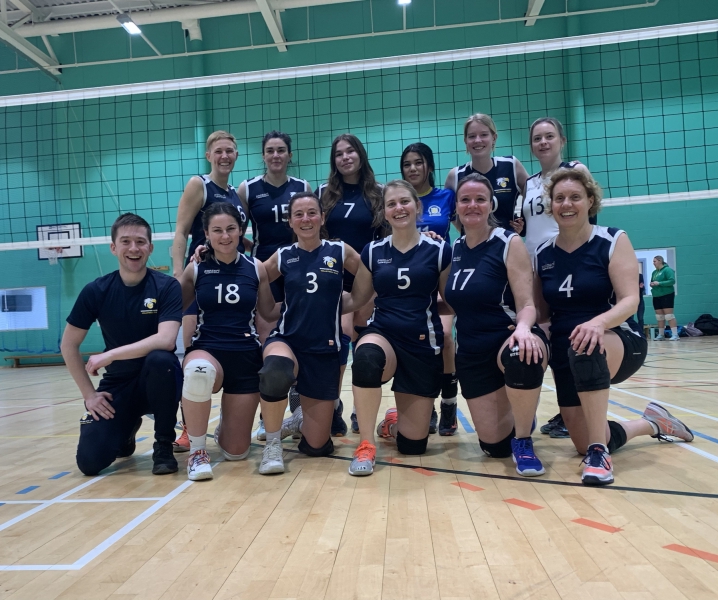 The Winchester Eagles Ladies Team had an amazing day at HVA today, bringing home three 2-0 victories, bringing them one step closer to SEVA.
The first game, against Guernsey Ladies, was the toughest. Guernsey is a team that had done very well at HVA last season and the Eagles were very keen to beat them. Our Ladies started very strong, with a series of killer serves from Liz that took them to 8-0. The Guernsey side was never able to recover from that. The Eagles kept the pressure on with more strong serves from all players and hard hits from the middle and the wings and the set was soon over.
The second set saw the Eagles dominating again and allowed coach Robin to bring in more players, to make use of a 12-strong squad. Our setter Fab worked very hard to keep all the hitters busy and the Eagles won the game 2-0.
After reffing a very tight game – SVC vs Guernsey Ladies, the Eagles knew that their next game versus SVC was going to be challenging too, as SVC was fielding quite a number of their NVL players.
At times, the Eagles found themselves under pressure against hard serves, but they responded well coming together as a team with a strong passing unit. They counter attacked with equally aggressive serves and relentless hits from both front and backcourt. There were some very good rallies with great play on both sides, but the Eagles came on top thanks to their superior skills and determination.
The last game against South Hants was an easier one, which gave Robin the chance to try players in different positions and make a lot of substitutions. Our youngest players proved very resilient when put under pressure and the Eagles brought home another 2-0 victory.
An awesome day of volleyball for the Eagles. Well played everyone. A huge THANK YOU to our coach Robin who, once again, did a brilliant job.

Eagles Double Up At SADVA 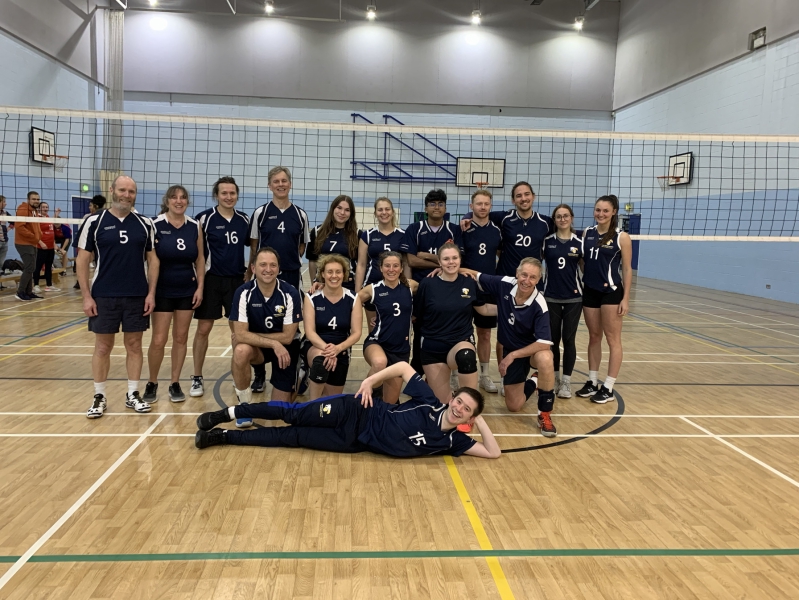 Last night, the Golden Eagles and the Black Eagles Mixed Teams played against each other and against SVC in the SADVA League.
In the first game, the Black Eagles started strong, easily beating SVC 2-0. It was great to see our young new players Tamsin and Anna coming on court so confidently on their first SADVA game. Well done girls! A special mention needs to go to Scott too, for entertaining the audience with his spectacular acrobatic dives.
The second game was an all-Eagles derby and there was a lot of banter across the net. Although the Black Eagles put up a good fight, especially in the second set, the Golden Eagles secured the game with a 2-0 win. It was lovely to see some of our veteran players back on court despite their various ailments. The game saw great performances all around for both Eagles teams.
In the last game the Golden Eagles faced SVC. Despite their best efforts, SVC couldn’t do much against a much stronger and more experienced side. The Eagles took advantage to practise some killer serves, shoot attacks and backcourt hits to add to the fun. It was a quick 2-0 to the Eagles, which allowed both Eagles teams to head early to the pub for the customary celebratory drinks.
Well played everyone!

Double win at SADVA for the Ladies 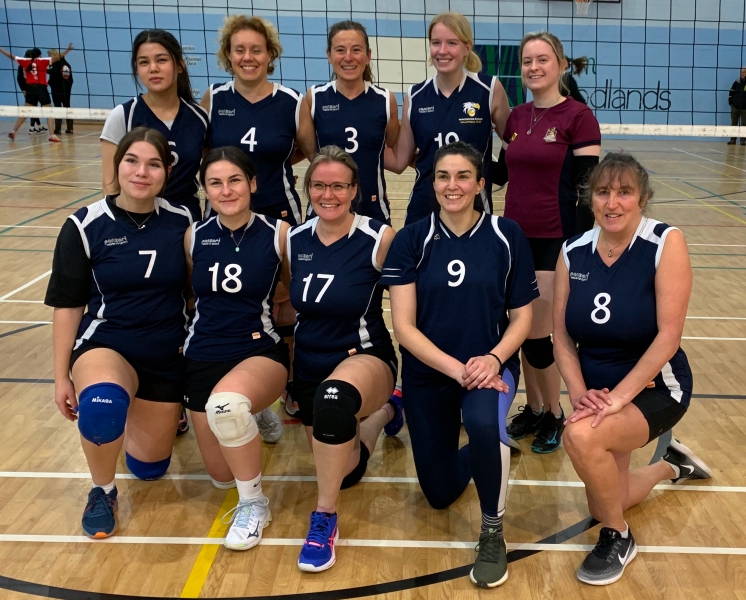 Last night the Winchester Eagles Ladies played their first two games of the 2022-23 SADVA League. The Eagles got to Woodlands with a strong ten-player team, giving coach Robin lots of options.

In their first game against Salisbury, the Eagles dominated the game. After a hesitant start, the team found its stride and secured the first set 21-11.

In the second set, the Eagles’ serves were just too strong for the opposition and the Eagles soon gained a very big lead, giving coach Robin the chance to experiment and try players in new positions. The set finished 21-2 to the Eagles. MVP went to Grace, who had her debut game with the team and proved an excellent middle player.

The second game was against SVC, a much stronger side with some very good servers. The Eagles, however, stepped up their game, neutralising the opposition’s aggressive serves with a stable and disciplined passing unit.

Strong serves and attacks from the Eagles let them secure the first set 21-15. In the second set, the Eagles set the pace and totally dominated the game, finishing the set 21-11. MVP went to Tania, who had her own devoted fun club to support her.

Very well done to our young new players, who performed extremely well even when coming on mid-set.

A great start of the season for the Ladies, with two decisive 2-0 wins.

The evening ended with the customary celebrations at the pub. A huge thank you to coach Robin, who managed the team so well. Well played everyone.

Christmas fun for the Eaglets 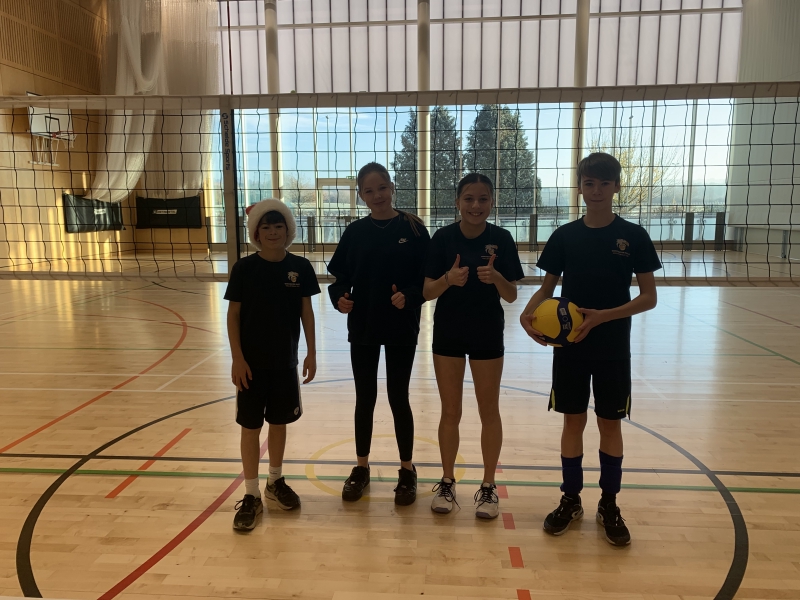 Today, our juniors dressed in their Christmas attire to take part in a festive end-of-the-year club tournament.
The Jingle Ballers, the Grinch Gang, the Ho Ho Hoes and the Noel it All competed in a series of very close 4 v 4 games, putting their volleyball skills to the test.
Well done to the Jingle Ballers who took home the gold and congratulations to our new players who bravely stepped on court for their first ever games.
The session ended with some very exciting 2 v 2 champions games. All the Eaglets then collected their Christmas treats and had a team cheer.
Well done everyone!
We wish all our juniors and their families a Happy Festive Season and we look forward to seeing everyone in the New Year..

We are headline news on Volleyball England's website - The Eagles have landed: a soaring club with a bursting junior section in Winchester 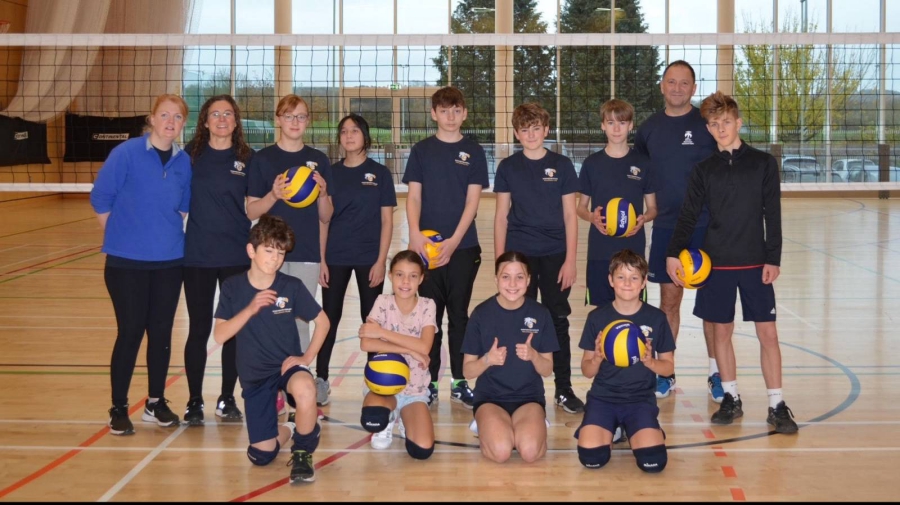 For 30 years Winchester Eagles existed as a small recreational club with a tight-knit group of players playing out of River Park Leisure Centre in Hampshire.

When their sports complex was earmarked for closure in 2020, the club turned what could have been a problematic situation into a great opportunity.

Chairman Jon Bance and Andy Riley, who was the driving force behind the club’s formation, spent long hours working with Sport England and the developers of a new site, Winchester Sport and Leisure Park, to not only ensure volleyball facilities featured in the new build, but that the club was a core part of the centre’s long-term vision.

As a result, rapid growth has followed.

Before the move, Winchester Eagles had around 15 members, organised one training night a week and entered one men’s and one mixed team in the local Hampshire League.

In their new home, Winchester Eagles – which was shortlisted for Club of the Year in 2022 – is a community club bursting at the seams. From January it will have around 80 members, organise five training sessions a week, and enter two men’s, one women’s and two mixed teams in to the SADVA local league as well as a men’s, women’s, mixed and junior team into the Hampshire Grand Prix.

“Our new home has been a great springboard without having to market ourselves as the new complex has drawn lots more people in,” explained Jon Bance, a lifelong volleyball fan who co-founded the Eagles from the remnants of another club in 1988.

But the club’s phenomenal growth in recent times has been tinged with sadness as co-founder Andy sadly passed away earlier this year. He was immensely proud of the club and the work undertaken by volunteers to transform it. While his health had kept him away for a year, his teammates and friends were delighted that he was able to attend one of the clubs infamous social nights one final time in December 2021.

Emergence of the Eaglets

For the first time in the club’s history, Winchester Eagles now caters for budding volleyball players thanks to adult members stepping up to create playing opportunities for their children.

Growing the club’s volleyball offering wouldn’t be possible without these volunteers stepping forward, says Jon, with the club’s core base of volunteers going from a small band to a team of 12.

“The committee have been incredible with Andy Mackay the driving force behind the juniors while also coaching the men’s team. Andy is a force of nature and loves giving back to the sport that has given him so much. I’ve also got to thank the amazing Robin Hunt for helping to professionalise our finances, Saffi Burns for leading our junior coaching and Andy, Angie Marchant and Clarisa Choh who support our junior programme. There’s also Dave Winson who leads our ladies coaching and other committee members. I cannot thank them enough. I am very proud of the club and our members.”

Jon stressed the importance of having a clear understanding of safeguarding requirements, enough coaches and clear channels of communication with parents before launching a junior programme.

In Winchester Eagles’ case, once those foundations were established and the sessions advertised on their website, they couldn’t keep up with demand.

“It went ballistic,” Jon added. “Our junior session was full within a week just through word of mouth. We probably now get an enquiry from parents or from an adult wanting to join twice a week.”

While admitting to doing very little marketing, the club did liaise with local schools, colleges and the university so those institutes could signpost any children or students with an interest to their website.

He also believes the club’s focus on fun over performance has encouraged more people to want to join in – not that it’s held back their most talented athletes; three took part in Volleyball Futures, which supports the development of young players who aspire to play for England, in 2021.

“The first year of our junior programme has surpassed all expectations,” said Jon, revealing the club has 50 children currently on a waiting list to join. “We now have so much interest from juniors that we could fill Winchester Leisure Centre for the whole of Saturday!”