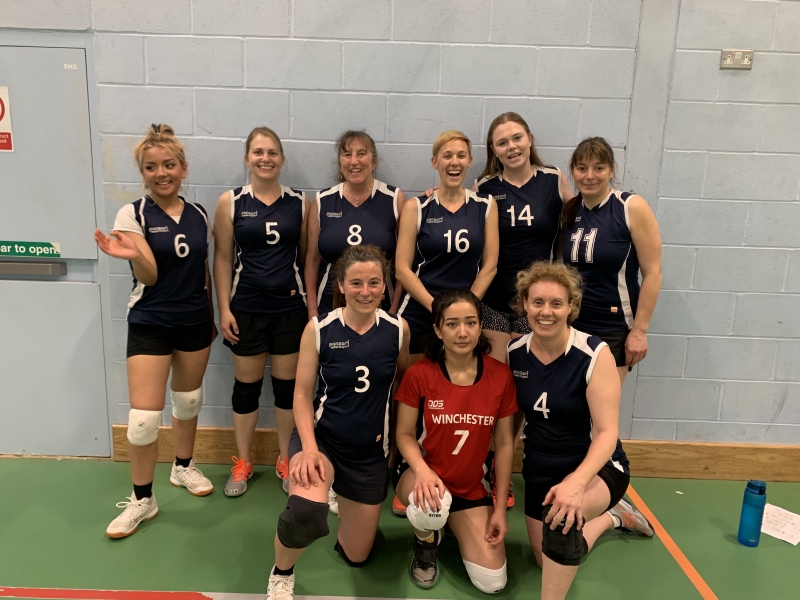 The Winchester Eagles ladies today competed in the South East Volleyball Association regional finals as one of the teams representing Hampshire.
The tournament included the two top teams from the Division 1 County Leagues in Sussex, Kent, Hampshire, Berkshire and Sussex. A total of ten teams, split into two pools of five.
The Eagles had to face Farnborough first, the team that would end up top of the pool. It was a tough game and although the Eagles tried their best, Farnborough took the game thanks to their aggressive and consistent serving.
The Eagles realised that they needed to improve their pass if they wanted to compete against teams with such strong serves, so they decided to start playing with a libero.
This stabilised their pass and defensive game and the matches against Dartford and Epsom were very close. There were many moments of brilliance, with quick sets through the middle that completely threw off the opposition block and some fast-paced attacks from the wings that wrecked havoc in our opponents’ defence.
The Eagles fought hard and gave their 100% for every point. The team grew incredibly throughout the day, with each game better than the one played before. They definitely played at their best in the last game against the Sussex Dolphins.
Although they didn’t make it to the finals, our girls showed great resilience, amazing team spirit and most of all a really big heart.
What an amazing achievement for this newly formed team. The club is very proud of every single one of you. Well done everyone!

Well done Eagles!!! 🥳 To see such amazing growth throughout the league has been absolutely fantastic, and the teamwork and effort you all put is outstanding!!!!