Eagles Ladies top of SADVA League with another double win 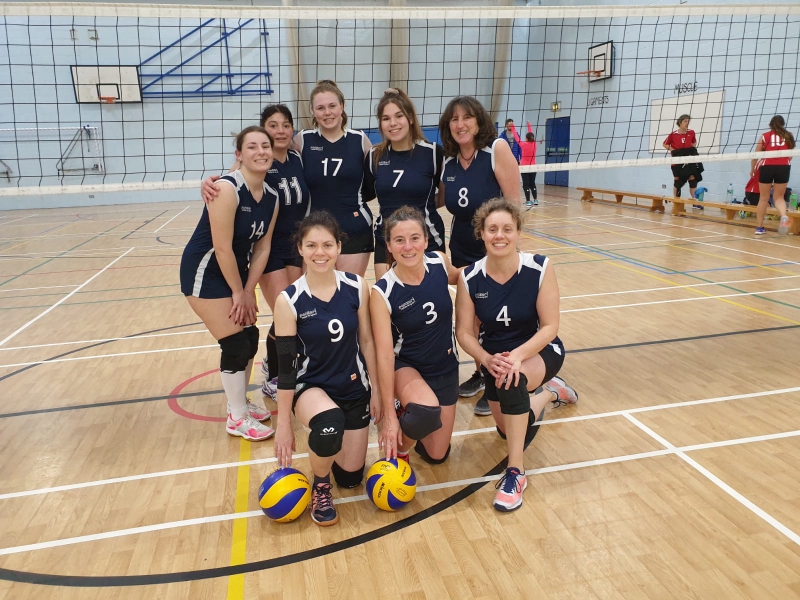 Yesterday night the Eagles Ladies had two impromptu matches in the SADVA League, stepping in for the New Forest Ambassadors who are unfortunately experiencing a Covid outbreak in their team.
The Eagles first faced SVC, a side that had just sneakily stolen a set from Roke with some aggressive serving. From the very start, the Eagles Ladies imposed their game, putting pressure on the opposition with their serves and relentless attacks. Our middle players Liv, Liz and Claire dominated the net, whilst strong hits from our wings Nina and Luuh and from our opposite Eleanna, left setter Angie spoilt for choice in her ball distribution. Some strong serves from SVC caused some trouble in the Eagles passing unit in the middle of the set, but they quickly recovered and closed the first set 21-18. In the second set, the Eagles came back even stronger, and kept a more comfortable lead, securing the set 21-14. Final score: 2-0 to the Eagles.
Roke was a stronger side to beat and they had been closely watching our game against SVC, so the Eagles decided to change their rotation and take them by surprise. Nina moved to the middle, Angie to 4 and Eleanna took on setting. This upset Roke’s plans and the Eagles easily secured the first set with a very comfortable 21-12. Roke attempted a come back in the second set and there were some really long and exhausting rallies, but the Eagles played very well as a team, persisting with some great saves and smart hits and tips, and came back on top every single time, killing all Roke’s hopes of victory. The Eagles secured the second set 21-16 to win the game 2-0.
After two 2-0 wins, a celebratory trip to the pub was the obvious choice and the Ladies headed to the Master Builder. What a great team and what a brilliant, fun-filled night. A special thanks goes to our loyal supporter Duncan, who will hopefully be joined by more Eagles fans in our future ( and not unscheduled) fixtures.
It has to be mentioned that the Eagles Ladies have now played all the teams in the SADVA League at least once, and that they are top of the league, unbeaten, with a smashing record of 4 out of 4 wins, all 2-0. Keep up the good work Ladies!