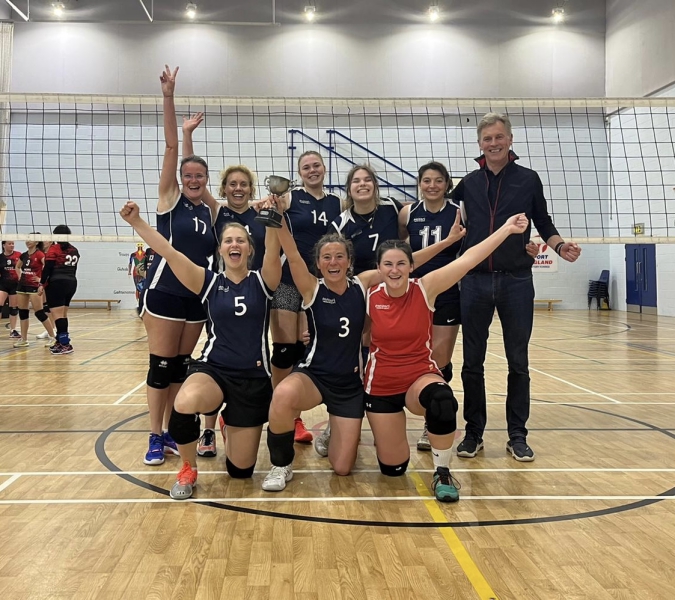 The Winchester Eagles Ladies did it. In their debut season, they won the Southampton and District Volleyball Association League. Undefeated. Finishing top of the league with a perfect score of 36 points, 18 points ahead of the team that came second (New Forest). What an achievement for a ladies’ team that has just started out!

Last night the Ladies had to face SVC and Roke, who came armed with a battery of NVL players, hoping to steal a game from the Eagles.

Well, the Winchester Eagles were not prepared to let that happen. Far from being intimidated, they rose to the challenge and imposed their fast-tempo game, with aggressive serves, smashing hits and very disciplined defence.

Fab kept everyone busy with her excellent ball distribution, Nina and Liz were unstoppable through the middle, whilst Katie, Angie and Liv kept the pressure from the wings. Beth, in her new Libero role was simply amazing, making it very hard for the opposition to score any points at all.

The ladies took the first game against SVC with a very convincing performance. The only trouble the opposition was able to cause was through some hard float serves from one of their NVL players but thanks to David”s strategic moves, the Eagles were able to quickly recover and take the game 2-1, winning the tie-break with a very convincing 14-9 score (there was no time to finish the set!).

In their game against Roke, the Eagles were on fire. Excellent defence meant they could run relentless middle attacks through the middle. Liz had an incredible game and the opposition could do nothing to stop her from smashing the ball to the ground again and again. Definitely MVP for the evening. In no time, the Ladies had taken the first set 21-13.

In the second set, Tania made her debut with the Eagles Ladies with an excellent performance through four. The Eagles took the second set 21-15 to win the game 2-0.

The SADVA League Cup was passed on from defending champions SVC to new Champions Eagles Ladies with loud cheers and the new Eagles Team call perfected by Liv.
Customary celebrations at the pub duly followed. A huge thank you to coach David for everything he has done for us. A big thank you also to all our supporters. It was really nice to play with some fans!

Another brilliant news article Angie. And what a brilliant evening for the Eagles ladies. Smashed it!

Great way to end the season! Thanks for letting me share with you girls. It is a fantastic team!!! Can’t wait for next season. Go Eagles 🎉