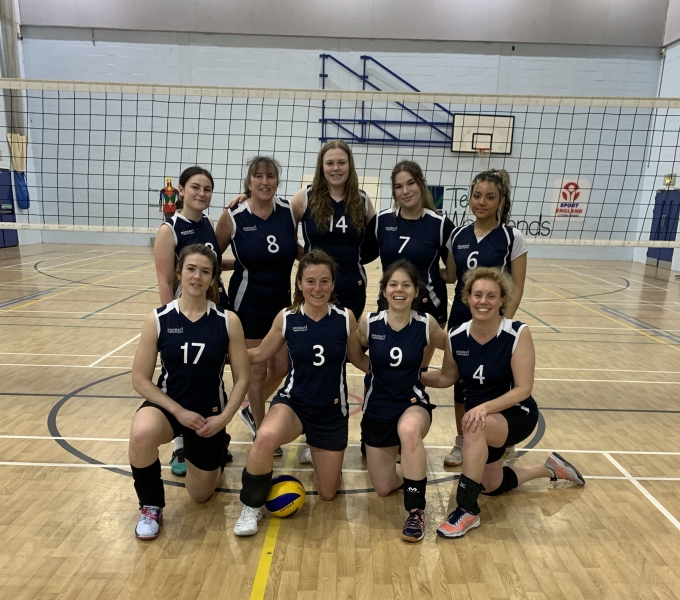 On a rainy Friday evening the Eagles showed up at Woodlands Community College with full strength and a full squad. Angie won our ‘coin’ toss as an unorthodox rock, paper, scissor game against the first opposition, Roke. On the whistle, Liz served strongly, leading the Eagles to win the first point. Despite some questionable digs and covering, Tara managed to put up some sets thanks to her amazing movement, and the Eagles secured a nice lead. Claire supported the team, giving super tips to the players and a consistent performance through middle, meaning the team secured the first set.
In the second set, the Eagles stopped flying but still remained high in the sky, securing it with a tight 23-21 victory.

Onto the second game, after a short rest of reffing, the Eagles flew onto court to tackle New Forest. With a completely different energy, the Eagles kept a high performance throughout the whole game. Lou, our opposite, took a chance with a great set to Angie who finished an outstanding point. Cheering and encouraging chants made the difference to take the Eagles to a comfortable 21-14 victory. In the second set, Tara came in. On this occasion our setter, Tara, showed great skills as opposite with consistent hits and getting up for the block whilst covering the sets when our setter, Fab, was taken out. Beth and Liv played a strong game, with Beth covering every inch of the back court and Liv securing the final point with a sublime back court hit, leaving the score at 21-12.

Throughout, the bench showed superb support, mostly Vicky shouting alongside Paul with his fingers in his ears – when she wasn’t on court smashing through four. An excellent game played by all players where everyone contributed to the team, the dream, unbeaten team.